“STEAM” stands for Science, Technology, Engineering, Arts and Mathematics. It represents a multi-disciplinary initiative that promotes creativity and high levels of student engagement, as they perform a series of group projects that not only involve five school subject domains, but also makes them more relevant, creative, discovery-based and interesting for students. 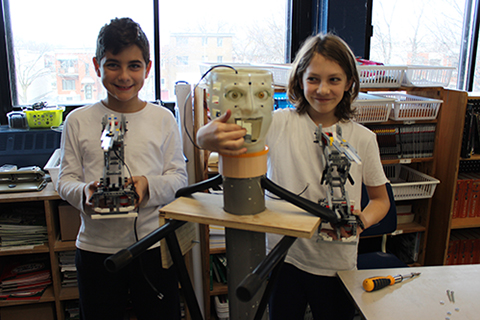 The three EMSB STEAM leaders are very encouraged with the positive impact the program has had on the students at General Vanier and Pierre Elliott Trudeau since September 2016. These students in particular always look forward to embarking upon their scheduled STEAM projects in their Makerspaces where they can learn, discover, be challenged and have fun at the same time. Their goal is to have as many of the EMSB’s elementary and high schools adopt the STEAM program, or at least some of its components, as part of their respective curricula within the next few years. 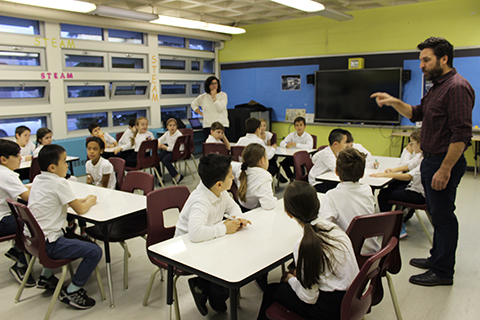 At the English Montreal School Board we are proud to have announced plans to expand our very successful pilot project run of the STEAM program, touting it as the future of how to teach Science.

For 2017-2018, 10 elementary schools (Elizabeth Ballantyne in Montreal West, Pierre de Coubertin and Honoré-Mercier in St. Léonard, Coronation in Côte des Neiges, Westmount Park, Carlyle in TMR, Gardenview in St. Laurent, Michelangelo in RDP, Dalkeith in Anjou and Bancroft in the Plateau) and two high schools (John Paul I in St. Léonard and James Lyng in St. Henri) have adopted the STEAM program.

Popular in schools in China, India and the United States, STEAM engages students in a hands-on, trial and error basis by involving them in a series of interactive projects that integrate the five educational disciplines that make up the STEAM acronym, using the latest technological devices and the most simplest of building materials. The projects involve the students in a group dynamic, as they work together by conceptualizing, communicating, collaborating and building within authentic situations that are given to them by their teacher. In turn, they figure out together how things work by actions, by bringing out a more reality-based approach into the classroom. As a result, these STEAM projects foster not only communication, conceptualization and collaboration, but also curiosity, creativity and critical thinking.

“Kids understand the process of inquiry, and how to question things,” said Ms. Iatauro. “STEAM provides the framework that moves students to the point of explanation, which will allow them to take ownership of their learning.”

The nucleus of the STEAM program is the “Makerspace,” which is usually a converted unused classroom. It provides the tools and supplies that are more accessible to the students for their use towards accomplishing the exercise or project in question and helps develop an atmosphere where innovative creativity and learning can take place. 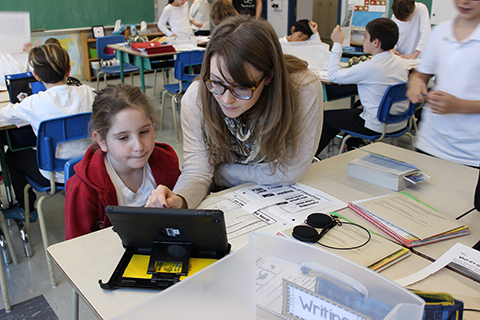 “The Makerspace provides the necessary tools that helps create the dynamic of being a place where a student’s mind can be stimulated,” said Mr. Doyon. “It’s a place that motivates you to try, to build and to figure things out. It’s like a stepping stone towards becoming an official STEAM school.”

“One of the most powerful moments for me so far with STEAM, was that one student came up to me and said that the Makerspace was their favorite classroom in the school,” added Ms. Iatauro.

A new way to teach

Each of the EMSB STEAM leaders enjoy promoting STEAM as the new wave of teaching and learning for the 21st century, and realize the benefits and challenges of integrating their respective disciplines that make up the program.

“Math is quite the challenge to integrate into the STEAM program, because it is usually taught as its own subject,” said Mr. Leblanc. “It is not always easy to see how the arts can be part of a math lesson. But STEAM is gradually changing that mindset. Right now, the students look at a STEAM activity and see how the math component can be covered.”

“All young people are artistic,” said Mr. Doyon. “They are always attracted to beautiful things and sounds. Art gives them that sense of wonder that not only makes them curious beings, but also sparks their creative minds. The arts discipline is quite central to the STEAM mindset. It gives them the chance to work on something, and then step back and see how they can make it better. As well, it gives them the opportunity to take chances and risks when they are involved in the creative process.”

“Science does form the foundation of STEAM, because like science, the program is based on the process of inquiry,” said Ms. Iatauro. “It always starts with an idea within the context of everyday life, which lends itself perfectly to STEAM, and makes it more authentic.”

“Science does form the foundation of STEAM, because like science, the program is based on the process of inquiry. It always starts with an idea within the context of everyday life, which lends itself perfectly to STEAM, and makes it more authentic.”

Ms. Iatauro added that she would like to have that sense of enthusiasm that students have about STEAM transferred to the teachers. And judging by their active participation in STEAM-related projects during two teacher pedagogical day workshops that took place during this fall, this is one goal that can be easily accomplished.

“There is a notion that teachers don’t want to change, and that’s not true. In fact, teachers are indeed curious and they want to be coached,” she said. “They are very open minded, and they are ready to challenge themselves and move forward to the 21st century educational model that STEAM represents. They want to support it, and they want to make STEAM work in their classrooms.”

May 02, 2019
EMSB Students shine at RoboCupJunior Québec Event
The English Montreal School Board was represented by 14...
Read More

Apr 25, 2019
Full STEAM Ahead: First Annual Maker Faire a success
The English Montreal School Board was proud to hold its...
Read More

Mar 12, 2019
EMSB and the Research Institute of the MUHC to launch historic STEAM partnership to engage youth in science
Read More

Feb 28, 2019
James Lyng STEAMS ahead with its new Maker Space.
What was once a small science lecture auditorium is now a...
Read More

Jan 26, 2018
Merton School Plays Leading Role in Robotics
When it comes to integrating robotics and computers into an...
Read More